TORONTO, March 29, 2022 – Maison Courvoisier was established in 1828 by Félix Courvoisier on the principle of celebrating the joy in the every day. Today, the Most Awarded Cognac House* embarks on an exciting journey to honour its heritage and embrace the future with the launch of a new campaign commissioned by artist and designer Yinka Ilori. This month, Courvoisier also announces the retirement of its sixth Chief Blender Patrice Pinet and the transition to his carefully selected successor seventh Chief Blender Thibaut Hontanx, as well as the release of a striking new look that reimagines design codes from the 1800s.

Courvoisier proudly welcomes Yinka Ilori as its “Ambassador of Joy” - a role created exclusively for the colourful storyteller. Ilori, the London-based multidisciplinary artist, is best known for fusing his subject with his British-Nigerian background to create unique and memorable stories through contemporary design. Inspired by Courvoisier’s unique embodiment of the French belief to savour life’s true pleasures, Ilori introduces “We Found Joy,” a fully immersive series of global events which brings the beauty of summer in Courvoisier’s home of Jarnac, France to life. It will kick off in New York City on March 3, 2022 and travel to cities worldwide later in the year.

“For me, the essence of joy is through the use of colour. It makes people smile, it brings people together and delivers a natural sense of conviviality,” said Yinka Ilori. “Like Courvoisier, each piece of my work is inspired by community, a celebration of the fabric of collective energy. I am delighted to be appointed Ambassador of Joy for Maison Courvoisier and look forward to introducing the world to ‘We Found Joy’, a physical manifestation of a warm summer’s day in Jarnac, France.”

Ilori stands alongside other creatives such as actress, writer, producer and director Rashida Jones, Michelin star Chef Vladimir Mukhin, award-winning jazz musician Moses Boyd, and fashion and beauty photographer Betina du Toit, who each will help bring the multi-sensory experience to life through their respective mediums and showcased in a compilation of films which capture each individual’s interpretation of joy titled “Welcome to Maison Courvoisier” released today on Courvoisier.com and the Maison’s social channels including Facebook, Instagram and Twitter.

This year, Courvoisier will redefine the cognac category as it unveils a new brand world that embodies the French belief of “joie de vivre.” Pinet has been an essential part of bringing that vision to life. While his legacy will live on for many years to come, Pinet proudly selects Thibaut Hontanx to succeed him as Chief Blender to carry on the tradition of heritage, craftsmanship and innovation. Hontanx has been an integral part of the Courvoisier family, most recently serving as Master Distiller.

“It is a true privilege to continue to make the dream of Maison Courvoisier a reality,” says Thibaut Hontanx. “As newly appointed caretaker of our exceptional range of cognacs, I will continue to embrace the Maison’s commitment to community. As each drop of our cognac is a collective effort, from our vine growers to our distillers, we value our close-knit group of artisans in Jarnac.”

In lockstep with the distribution of the “Welcome to Maison Courvoisier” film series, the recently released packaging will debut globally across the award-winning portfolio. The new look rediscovers distinctive codes from centuries past that made Courvoisier iconic during the Belle Époque era, the opening of the Eiffel Tower and while gracing the royal courts of Europe during the 20th century.

“We are entering a new era for Courvoisier,” said Managing Director for Maison Courvoisier Jon Potter. “This is an exciting time for our Maison, as we go back to our roots and embrace what Courvoisier was founded on by Félix Courvoisier. From our home in Jarnac to our portfolio of beautiful, floral cognacs, our house believes in being welcoming to all.”

Offering a taste of refined history in each sip, the range of Courvoisier expressions have been expertly distilled, matured and blended in the Maison’s award-winning signature floral style, revealing intricate nuances influenced by the life and joy of the cognac region and its people. A rich palette of crus, precise distillation and signature oak selection come together to offer an exquisitely balanced and vibrant range, including VS, VSOP, XO, and the ultimate expression of the House, L'Essence de Courvoisier.

A cognac that transcends the category, Courvoisier lends itself to festive, daytime consumption with refreshing cocktails such as The Gala. For more information and suggested serves, please visit Courvoisier.com.

Method: Build in a highball glass over ice and stir gently. Garnish with a lemon wheel.

About Courvoisier Cognac
Maison Courvoisier was founded by Félix Courvoisier in 1828 in Jarnac, France. Courvoisier is the Most Awarded Cognac House* with a range of expressions that appeal to a variety of cognac preferences and lifestyles, including VS, VSOP, XO, and the ultimate expression of the House, L'Essence de Courvoisier. Based on the joyful, generous, and sophisticated house style and commitment to community and craftsmanship, Courvoisier continues to value its relationships with local artisans and winegrowers to produce its high quality, award-winning cognac portfolio. For more information on Courvoisier, please visit www.courvoisier.com.
*Based on 20 top spirits competitions since 2019.
About Beam Suntory
As a world leader in premium spirits, Beam Suntory inspires human connections. Consumers from all corners of the globe call for the company’s brands, including the iconic Jim Beam and Maker’s Mark bourbon brands and Courvoisier cognac, as well as world renowned premium brands including Basil Hayden, Knob Creek and Legent bourbon; Yamazaki, Hakushu, Hibiki and Toki Japanese whisky; Teacher’s, Laphroaig and Bowmore Scotch whisky; Canadian Club whisky; Hornitos and Sauza tequila; EFFEN, Haku and Pinnacle vodka; Sipsmith and Roku gin; and On The Rocks Premium Cocktails.
Beam Suntory was created in 2014 by combining the world leader in bourbon and the pioneer in Japanese whisky to form a new company with a deep heritage, passion for quality, innovative spirit and vision of Growing for Good.  Headquartered in Chicago, Illinois, Beam Suntory is a subsidiary of Suntory Holdings Limited of Japan.  For more information on Beam Suntory, its brands, and its commitment to social responsibility, please visit www.beamsuntory.com and www.drinksmart.com.
About Yinka Ilori
Yinka Ilori MBE is a London based multidisciplinary artist who specializes in storytelling by fusing his British-Nigerian heritage to tell new stories in contemporary design. He began his practice in 2011 up-cycling vintage furniture, inspired by the traditional Nigerian parables and West African fabrics that surrounded him as a child. Humorous, provocative and fun, each of his projects tells a story, bringing Nigerian traditions into playful conversation with contemporary design. His work touches on various cultural themes that resonate with audiences all over the world.
In 2020, Yinka was awarded the acclaimed Emerging Design Medal at the London Design Festival, announced as an MBE recipient in the 2021 New Year Honours List and served as Creative Director of the BRIT Awards. In October 2021, Yinka was named by The New York Times as one of the twelve artists shaping the global design industry.
Key Takeaways
https://www.courvoisier.com
Download
Media Gallery 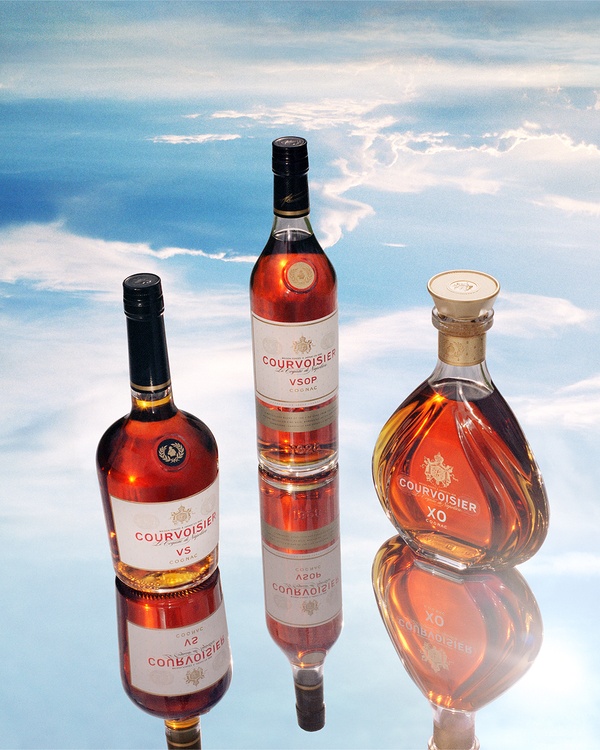